Justice for women and families of Nunavik has become a central concern for Saturviit. Since the launch of Canada’s National Inquiry into Murdered and Missing Indigenous Women and Girls, Saturviit has initiated several events, actions and tools that address Nunavik-specific issues related to justice, violence, and murdered and missing Nunavimmiut.

In 2016, in the wake of the pan-Canadian movement to conduct a National Inquiry into Missing and Murdered Indigenous Women and Girls, Saturviit initiated a regional project to document the specific situation of Missing or Murdered Nunavimmiut (MMN), to give a voice to families of victims and to put forward their needs.

A 5-day gathering of victims’ families was organized in the Inukjuak campsite in April 2016. 18 family members and 9 regional representatives participated.

Following this, nine telephone interviews were conducted with police officers, justice coordinator, social workers and other professionals to learn more about the issue in Nunavik. The report and summary of The Inquiry into Missing or Murdered Nunavimmiut were published in 2017.

In fall 2017, Saturviit organized a roundtable on justice in Kuujjuaq to present its report on MMN to regional representatives and to providers of justice-related services. During that session, after discussions about the justice system and justice-related services, participants were invited to suggest concrete actions that would meet the concerns and needs of crime victims and their families.

Saturviit now promotes this Justice Action Plan in Nunavik municipalities, the Nunavik regional organizations and the Quebec and Canadian governments. Everyone, at every level, must contribute to make these actions happen.

A new 2018 publication by Saturviit, Justice in Nunavik Communities, also responds to the need to provide tools and resources for Inuit women to be better informed about the justice system and social harmony for Inuit communities. 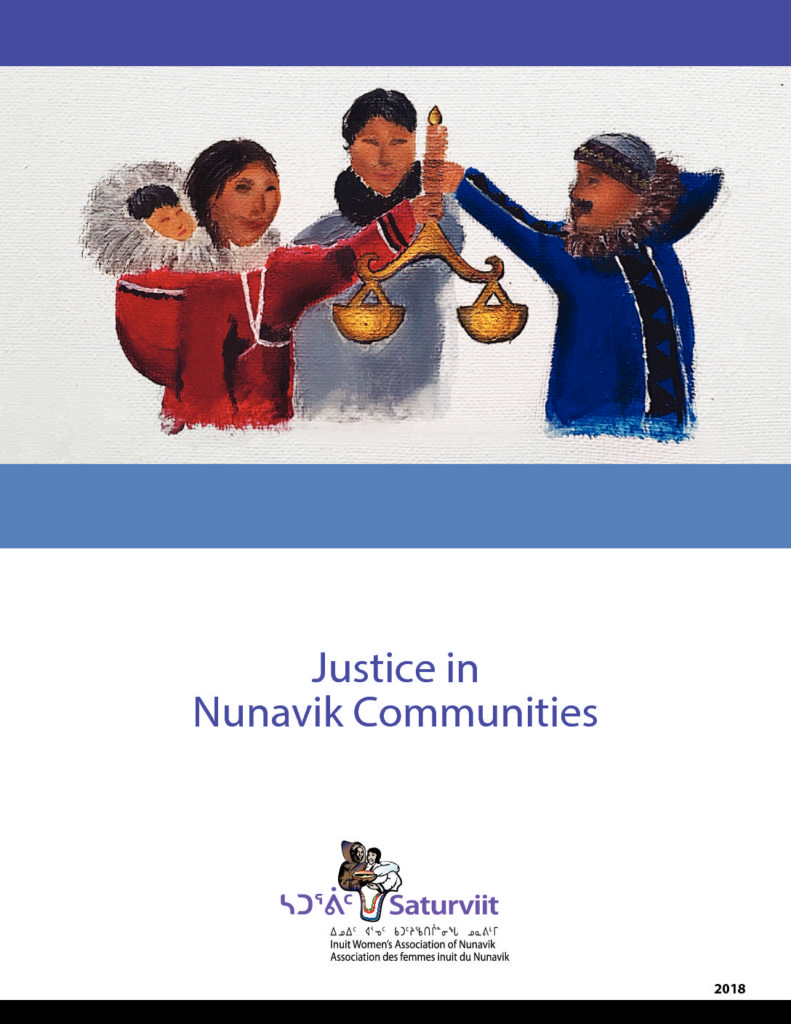 This booklet on Justice in Nunavik Communities was published in 2018. It intends to offer a broader understanding of what justice means in Nunavik, offering Inuit perspectives on social harmony and resources to help resolve conflicts related to the justice system. The purpose of the publication is to help women build confidence in their ability to govern themselves and maintain harmony in their families and communities.

The Justice Action Plan is a result of a Roundtable between Saturviit and KRG, Makivik, KRPF, Qarjuit in November 2017. It identifies four priority actions responds to some of the concerns and needs of crime victims and their families. 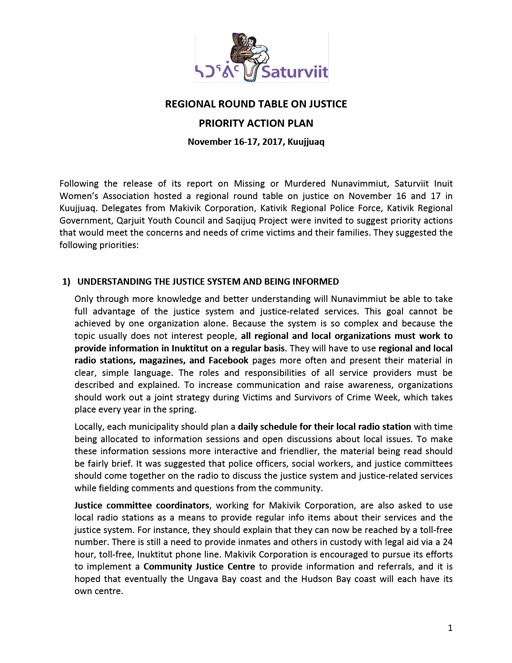 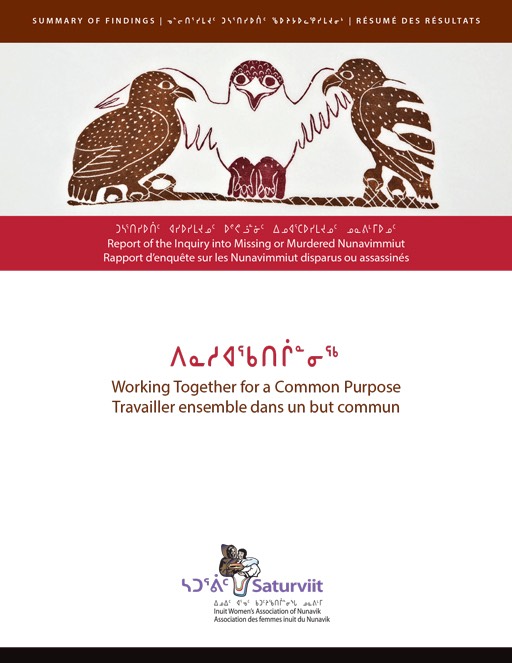 This report presents the results of an inquiry initiated in 2016 by Saturviit Inuit Women’s Association of Nunavik, in the wake of the pan-Canadian movement to conduct a National Inquiry into Missing and Murdered Indigenous Women and Girls in Canada. The objective was to document the situation specifically in the region of Nunavik, to give a voice to the families of victims and to put forward their needs.

To document and address this issue in Nunavik, Saturviit organized a gathering with victims’ families and regional representatives in Inukjuak in April 2016. To complete the picture, interviews were conducted in the summer of 2016 with a few workers, including police officers, social workers and a justice committee coordinator.

The inquiry report exposes many concerns, issues, and needs that relate to the loss of loved ones, the counseling and therapy services available in the communities, and the general conduct of the criminal justice system in Nunavik.